We have seen airlines around the world offer “flights to nowhere” to both generate revenue and attract those who want to travel but cannot do so due to travel restrictions. Well, here is a particularly interesting concept for flying to nowhere.

Ukraine International Airlines (UIA) will operate some flights to nowhere in March “in response to numerous requests from beloved passengers”, which the airline calls “a real spring gift”. The flights are described in such a way that they “show the world through the eyes of a pilot”.

Tickets for these special flights are $ 95 per person and include:

On the flight there will even be “tour guides” in the form of UIA pilots who sit in the cabin and exchange aviation stories. As UIA further explains:

“And pilots will be happy to answer a lot of questions and dispel the myths that are hidden in aviation. What professional superstitions do pilots have? Is it true that the autopilot does all the work in flight? Can you fly without engines What is turbulence and should you be afraid of it? And many more secrets and life hacks!

The tour is particularly recommended for flight recipients! “

Flight over Chernobyl Airport and Antonov

Most of the airlines that operate flights to nowhere do not fly at particularly low altitudes. Therefore, these flights are unique in the sense that they are only performed at an altitude of approximately 3,000 feet. But the route the flights will take is even more interesting.

Here is the event schedule for these special UIA flights: 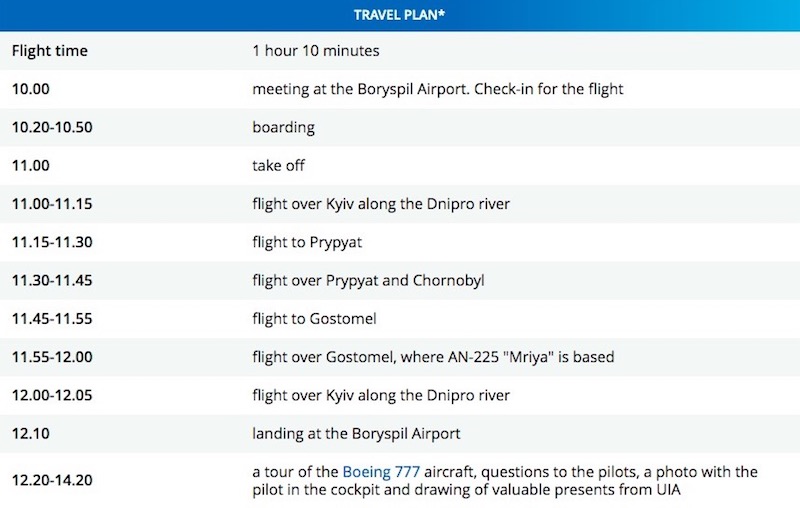 Two things stand out in particular:

This is not just your average flight to nowhere in the sense that it is not just about enjoying food and drink and being in the air, but rather some areas noteworthy.

Ukraine International Airlines will be launching some flights to nowhere in March, where an Embraer 195 will fly for around 70 minutes with views of Chernobyl, Antonov Airport and more.

So far, the airline has only planned two of these flights, although apparently there is quite a bit of interest so we could see more of them.

What do you think of UIA’s version of a flight to nowhere? Given the context, is it cool to fly over Chernobyl or just weird and creepy?